This slide was featured in our latest Half-Time Presentation. This is a very important slide and to me, raises a big question. There have been countless political issues and international wars, but the American market has persisted. The problems that can devastate a financial market, are well, financial.

The three forty percent or more downturns have been caused by irresponsible financial moves.

1) The great depression was exacerbated by a misinformed and inexperienced central bank*.

2) Tech bubble was again a credit expansion in companies that did not necessarily have the income to back up their valuations.

During my graduate career at George Mason University, some of my studies were on monetary policy history. This is why I am curious as to how the Federal Reserve plans to wind this down. Essentially, quantitative easing was an attempt to spur on the economy via loan growth by lowering long term loan rates. The Federal Reserve did this by buying their own medium to long term bonds with money they created.

This brings me to break down the picture from the economist article.

Those worried about hyperinflation caused by QE were worried that this much monetary expansion would turn us into Zimbabwe. Mugabe printed money and then used it to buy the latest fashion, cars or stocking up on food, the Federal Reserve bought long term treasuries and mortgage backed securities to bring down interest rates and prop up the major losses from the housing crisis. This most likely spread out the inflation over time. 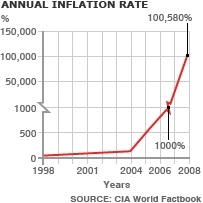 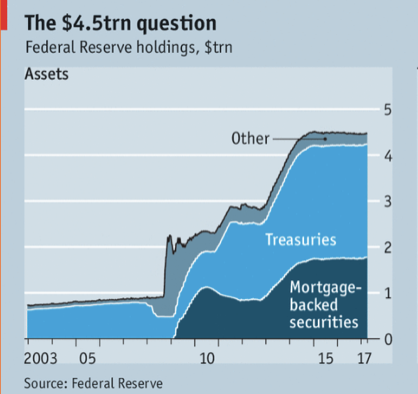 The Federal Reserve recently, in an effort to wind down their balance sheet, has not been repurchasing new investments as they expire and have not been reinvesting their dividends as they receive them. The majority of the treasuries will be expiring in 1-5 years. I am most interested in how this affects inflation. As with all things, this requires trust and faith in those running the Federal Reserve. I hope Janet Yellen will be able to manage this with the many levers the Fed can pull on the money supply. It is unlikely that she will remain as Fed Chair and whomever the president chooses to replace her will have to deal with the largest part of unwinding. 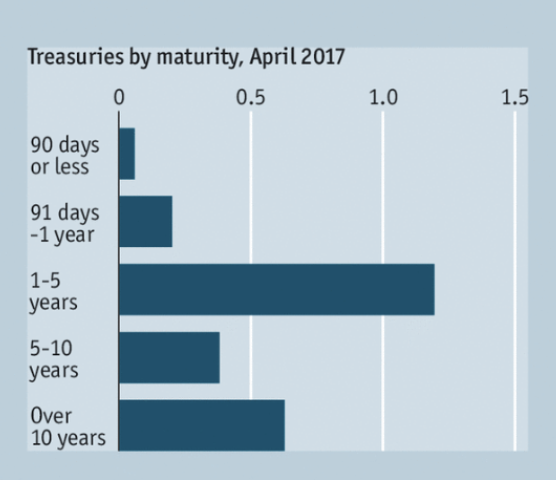 This is how I understand the current situation. I am open to criticism, questions, and errors in my thought process. Personally, I wish the Federal Reserve never traveled down the path of QE, but we must always look forward on how to deal with upcoming problems. Janet Yellen has been very consistent and clear. I hope they are successful in guiding the monetary policy safely back to normal, but these are uncharted waters.